24. 11. 2015
Thanks to two current projects underway we are able to exchange good practices with our Norwegian colleagues working with the victims of domestic and sexual violence. Our May visit to Norway was returned during the week of 9 -13 November 2015 by three experts from that country.

The two women and one man who flew to the Czech Republic from various parts of Norway gave us a holistic picture of the state of aid for victims of sexual violence on the Norwegian “scene”.  Even though each of them came from a different place, they all share the same aim. Thanks to that, they created a wonderful atmosphere and captivated both the experts we invited to learn from them and our own team.

Inge Nordhaug has been practicing for 30 years as a clinical social worker in child and adolescent psychiatry at a center focusing on working with trauma and its treatment (RVTS). Counseling activity in the area of sexual abuse and violence is among his competences. This work was touched on by his lecture on trauma and how to cope with it. His analysis included an historical review of how trauma has been worked with in the past; the impacts of childhood stress on an individual’s subsequent development; and how to communicate the principles of one’s approach to a victim of abuse. The presentation included examples from his practice, visual aids, and no lack of discussion. 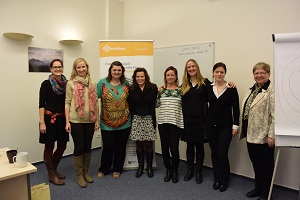 Inger Lise Stølsvik is the director of a drop-in center for victims of incest and sexual abuse (SMISO) in Telemark. She takes care of the daily operations of the center and dedicates herself to lecture activity and research focused on the sexual abuse of children. She and her colleague Kathrine Aamodt (the head of the same center in the Hordaland area and also the head of the umbrella organization FMSO) presented on Norwegian practice in the educational, legal and social welfare systems.  During their presentation they asked us what the situation in the Czech Republic is like and the main differences between the two systems therefore came to light.

Kathrine concentrated on describing the interdisciplinary collaborations of the FMSO with other institutions and organizations in the context of Norwegian law. She also presented statistics and updated research on the issue of sexual violence in Norway.  She highlighted that almost all of the SMISO centers in Norway (with the exception of two) are part of the FMSO organization. It is precisely from that unity that the organization gets the power to advocate for desirable changes at the state level. Another advantage is the strong support from the media that the FMSO receives when combating prejudice and striving for the topic of sexual abuse to be taken seriously in society.  Inger Lise also reported on the results of a research project that led to improvements in their work with clients. They also discussed the philosophy of self-help, which has a longer tradition in Norway than it does in our country.

The Norwegian system is, to a significant degree, focused on aid to children. Protective measures, examination methods with regard 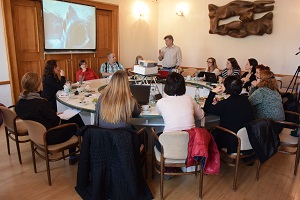 to preventing further victimization by investigators, and preventive programs across the schools are better established and more integrated than they are in our country. As part of the lectures we watched several videos that have served well precisely for prevention purposes. Norwegians are not afraid of getting to the point and don’t beat around the bush (or at least the older children and young adults don’t). Through sex education, children are taught what is and is not normal behavior.  They are then better able to assess whether something wrong has happened to them if they aren’t certain. By the same token, this education also has the opposite effect – they know what they are and are not allowed to do to someone else. For younger children, prevention is focused more generally. With them the work is about their finding a trustworthy person in whom to confide any “unhappy secrets”.

Despite the diversity of some our approaches and opportunities, we found that we are very similar. The entire week was full of information, but the exchange took place in a natural, unforced way. No one became “overwhelmed” – on the contrary, we could still find more questions and topics to discuss right now. We are glad we were able to welcome such dear colleagues to our country and we believe it was not for the last time.

This sharing of practices in the Czech Republic was implemented thanks to the project “Escape from the Maze of Violence”. The Project is being supported by the Open Society Fund Prague from the Let’s Give (Wo)men a Chance programme, financed from Norway Grants.